Can I Drive in Japan?

To drive a car in Japan, valid license is required. In case you do not have valid license here in Japan, car rental will not be able to rent cars to you.
Please prepare your passport, driving licence which is issued in country or region where you stay and International drivinb permit. 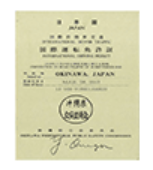 2International driving permit under the Convention of Road Traffic on Sep. 19, 1949

4The SOFA driver license for US Forces Japan

The driver's license required to drive in Japan is not be affected by the nationality(countyr which your passport is issued) but is affected by country or region which your driving licence is issued.
Since the law concerning international driver's licenses is strictly managed in Japan, there are many international licenses which are not effective in Japan even though they are effective in other countries.