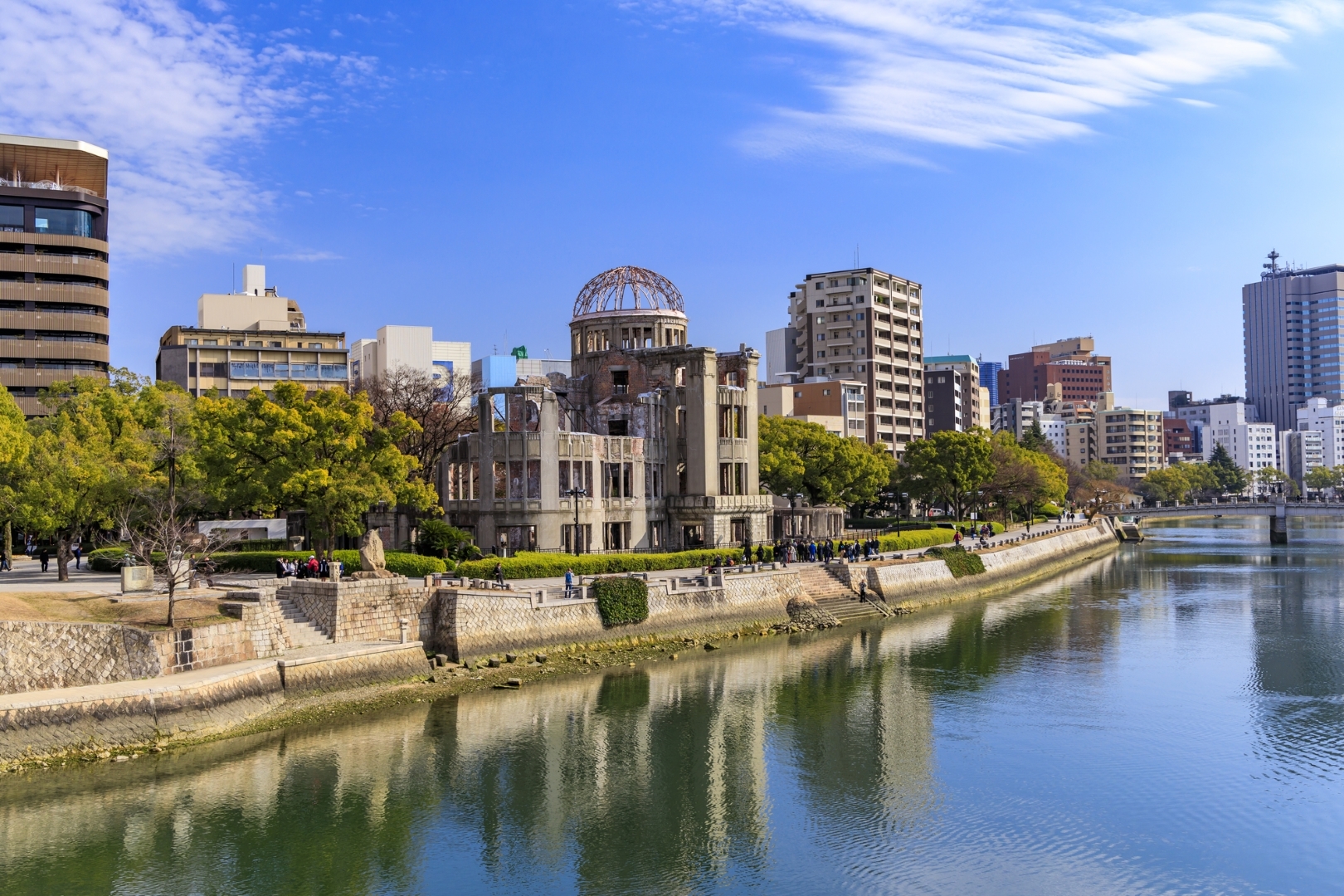 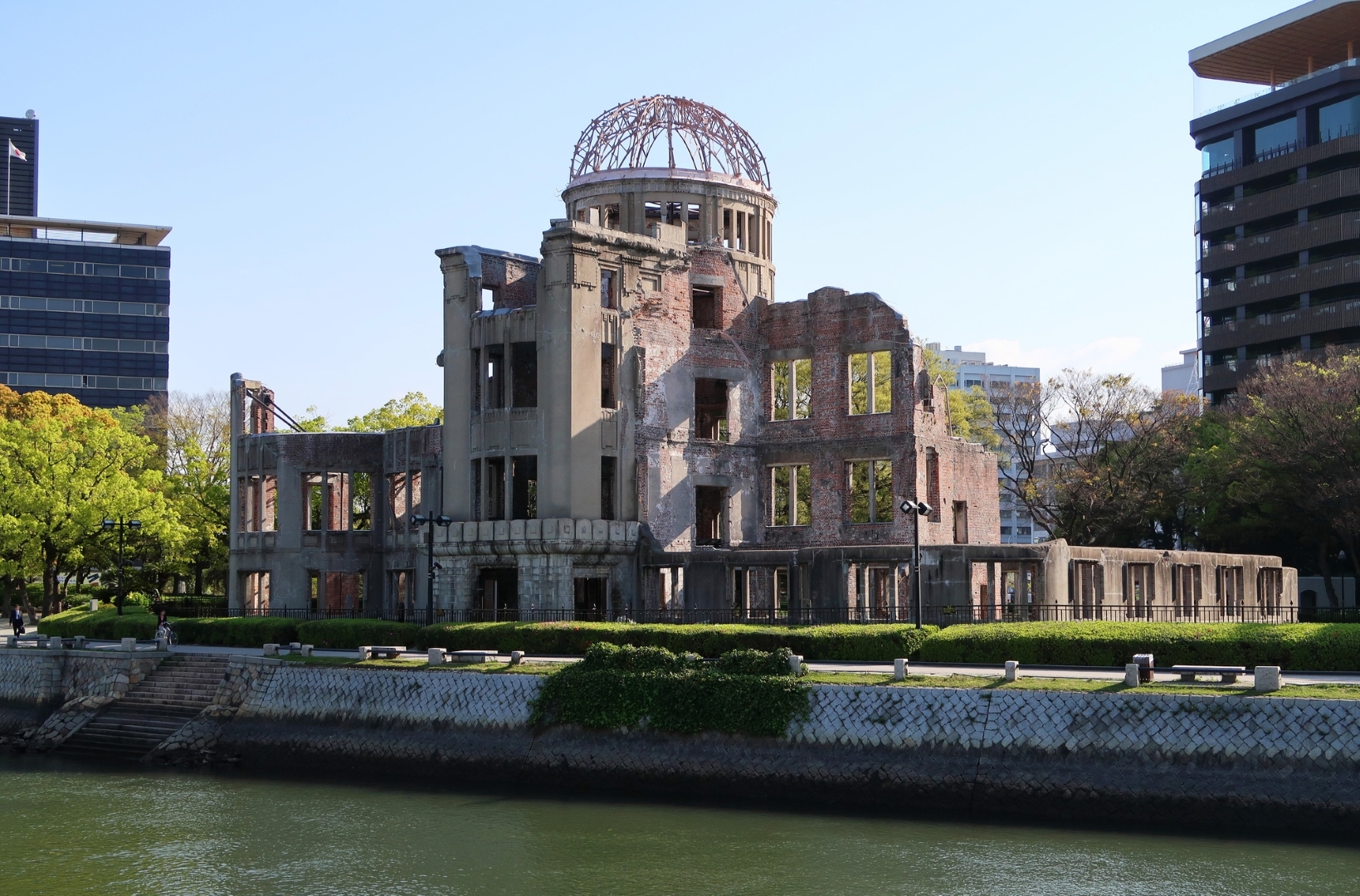 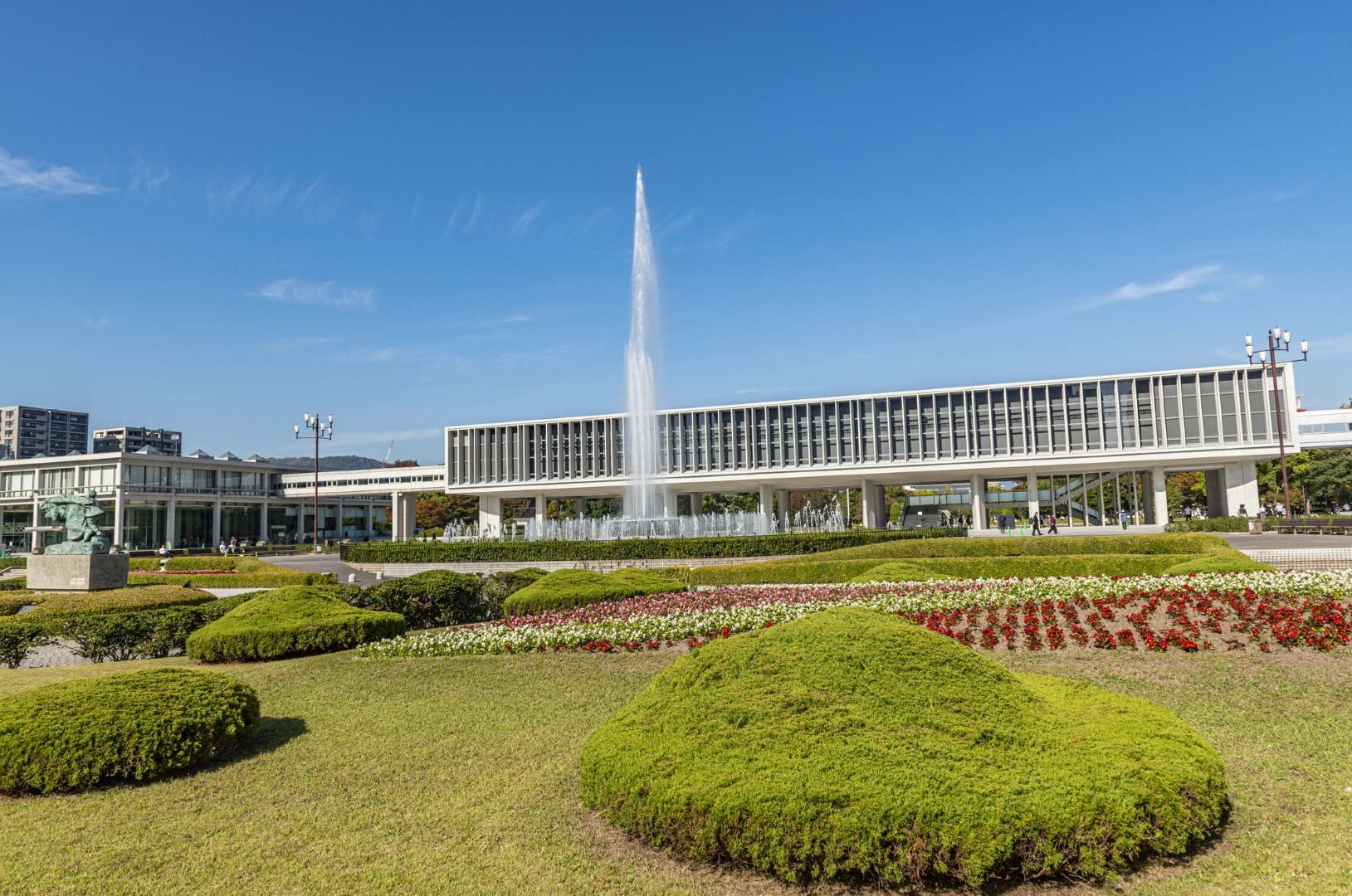 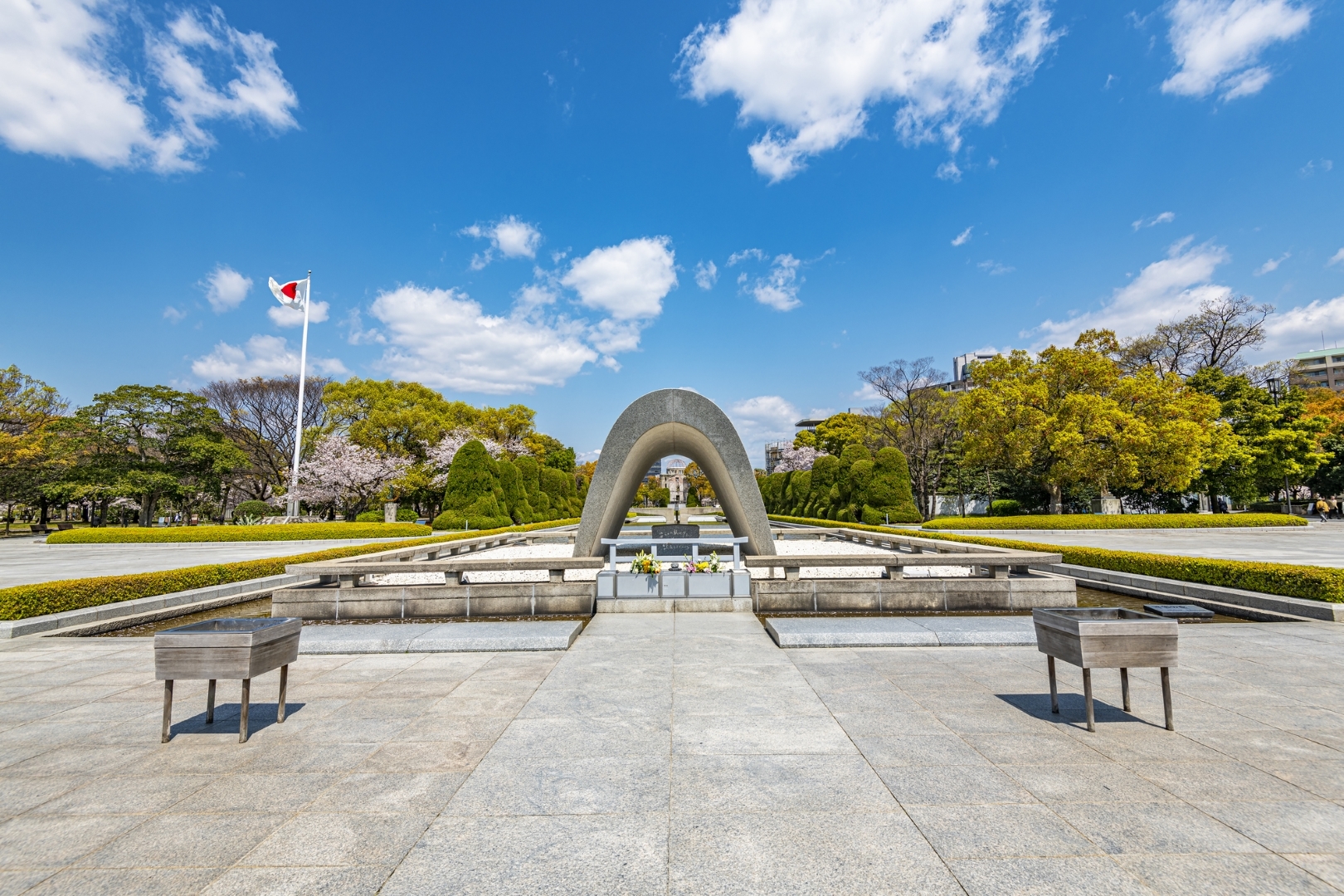 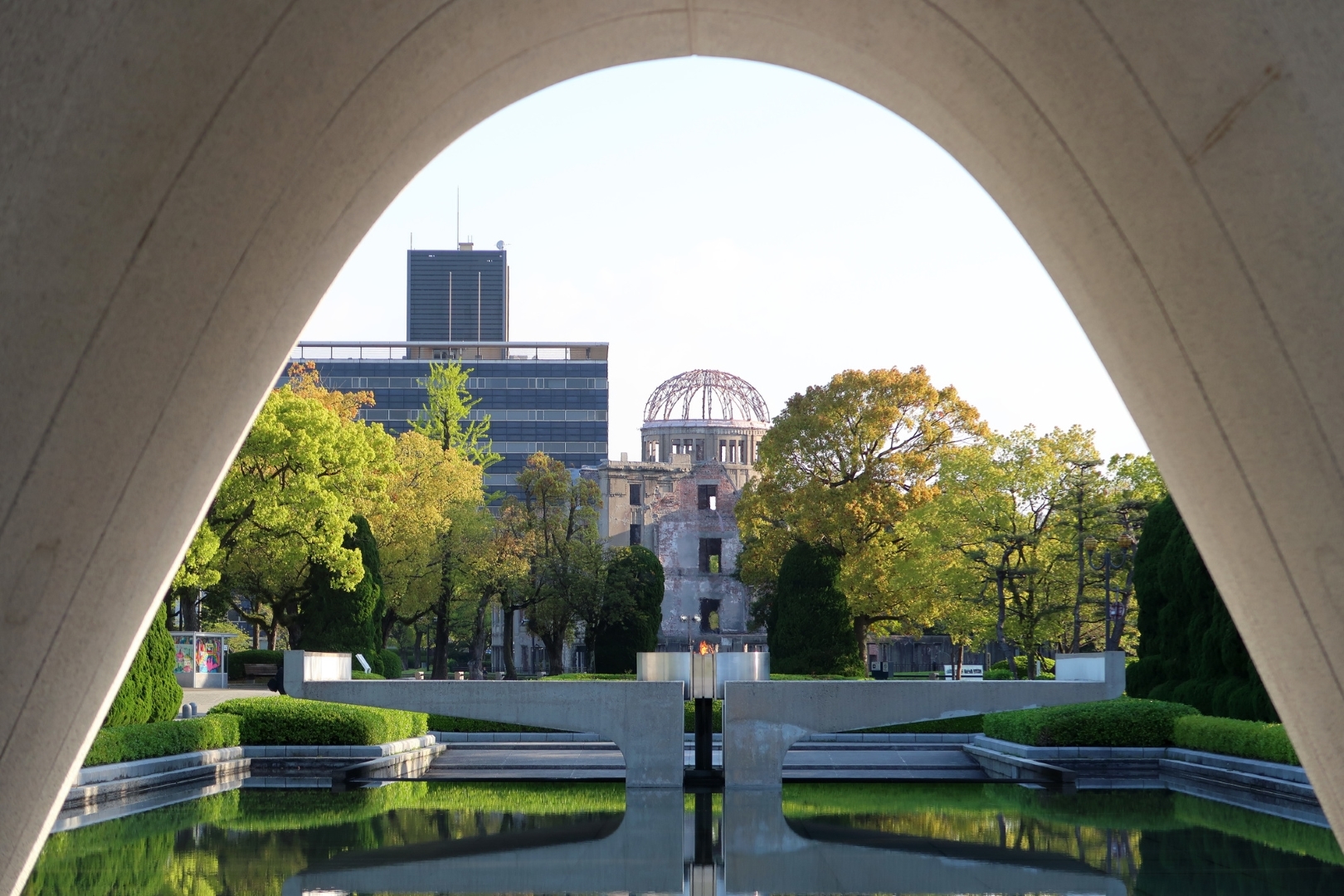 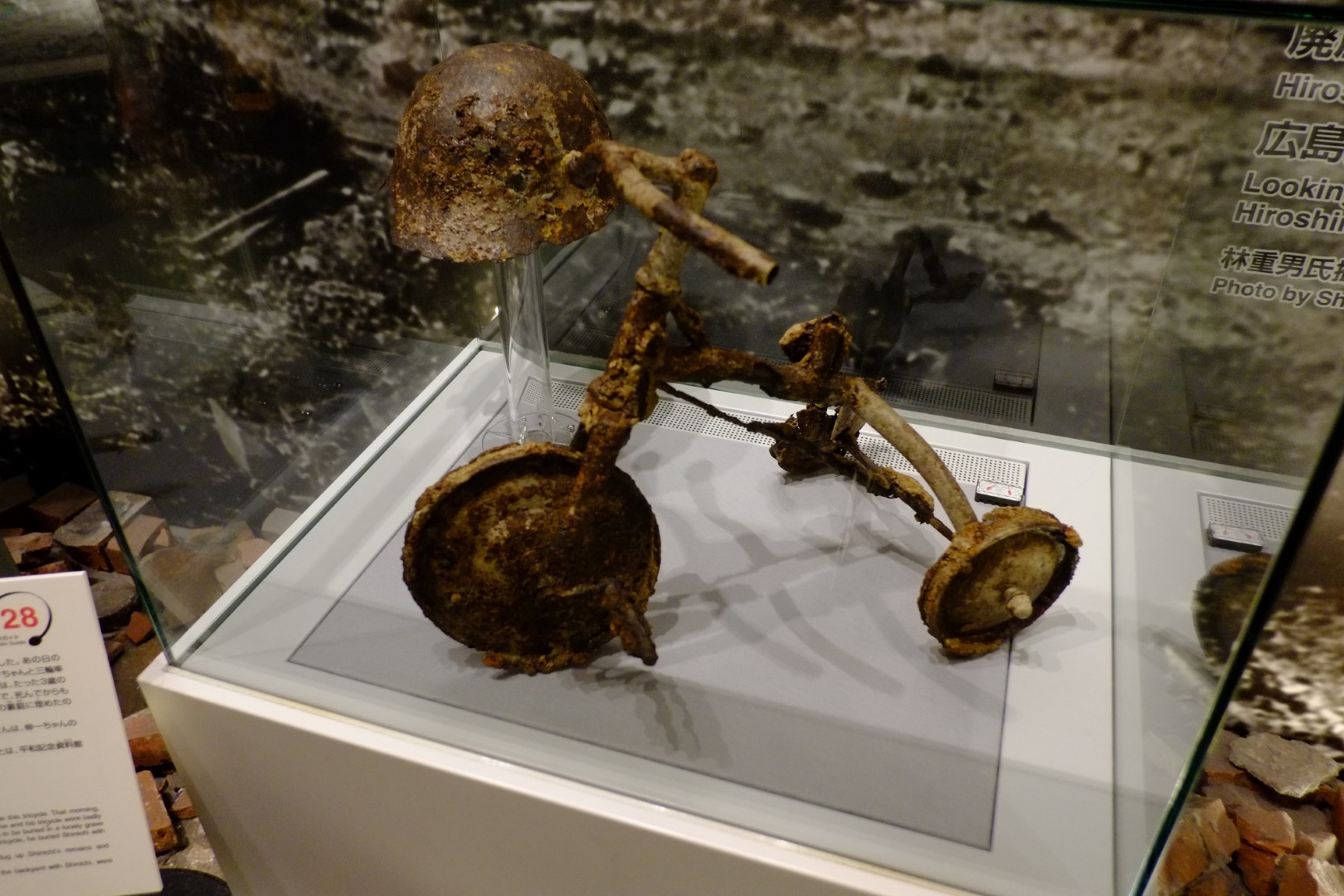 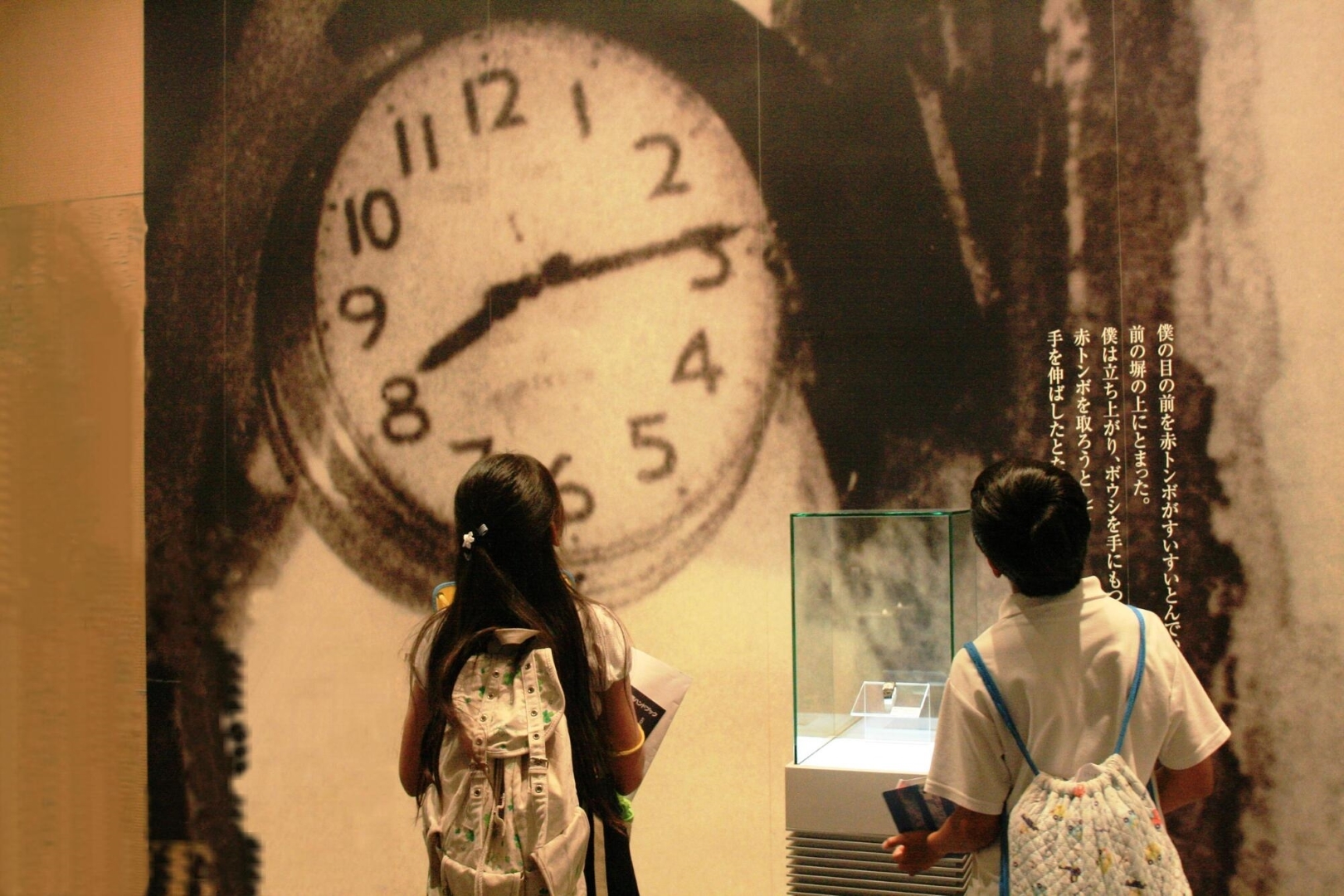 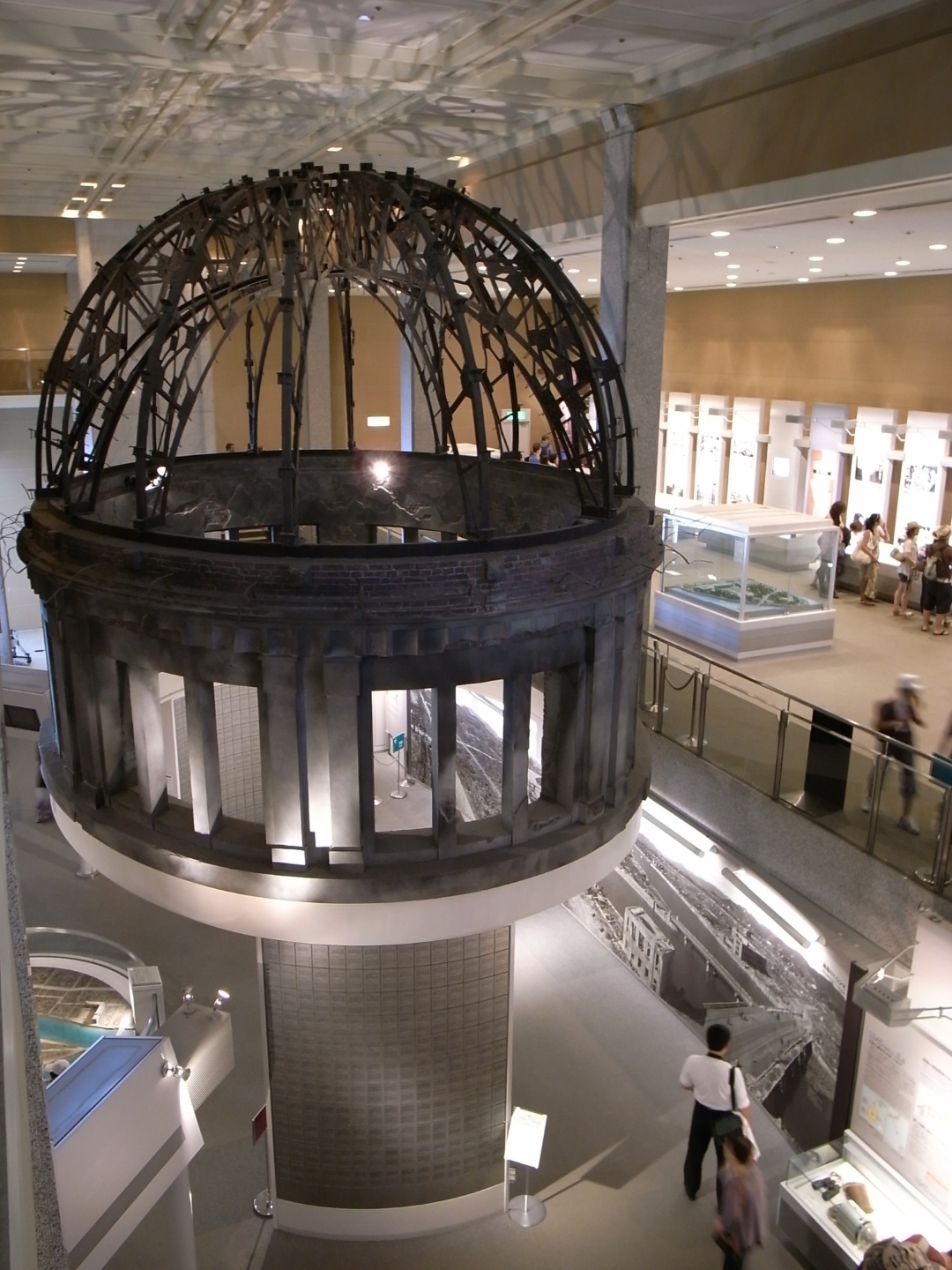 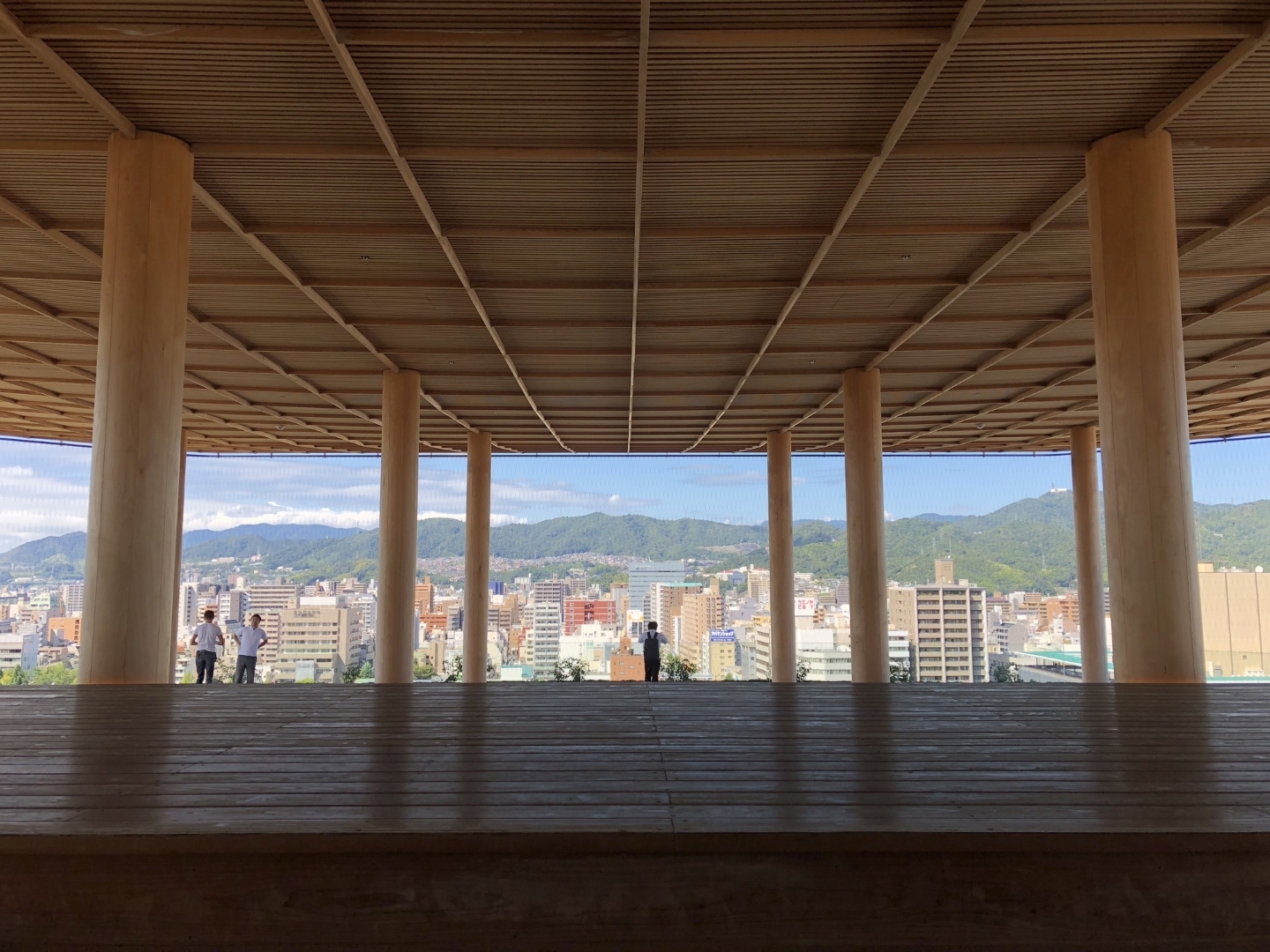 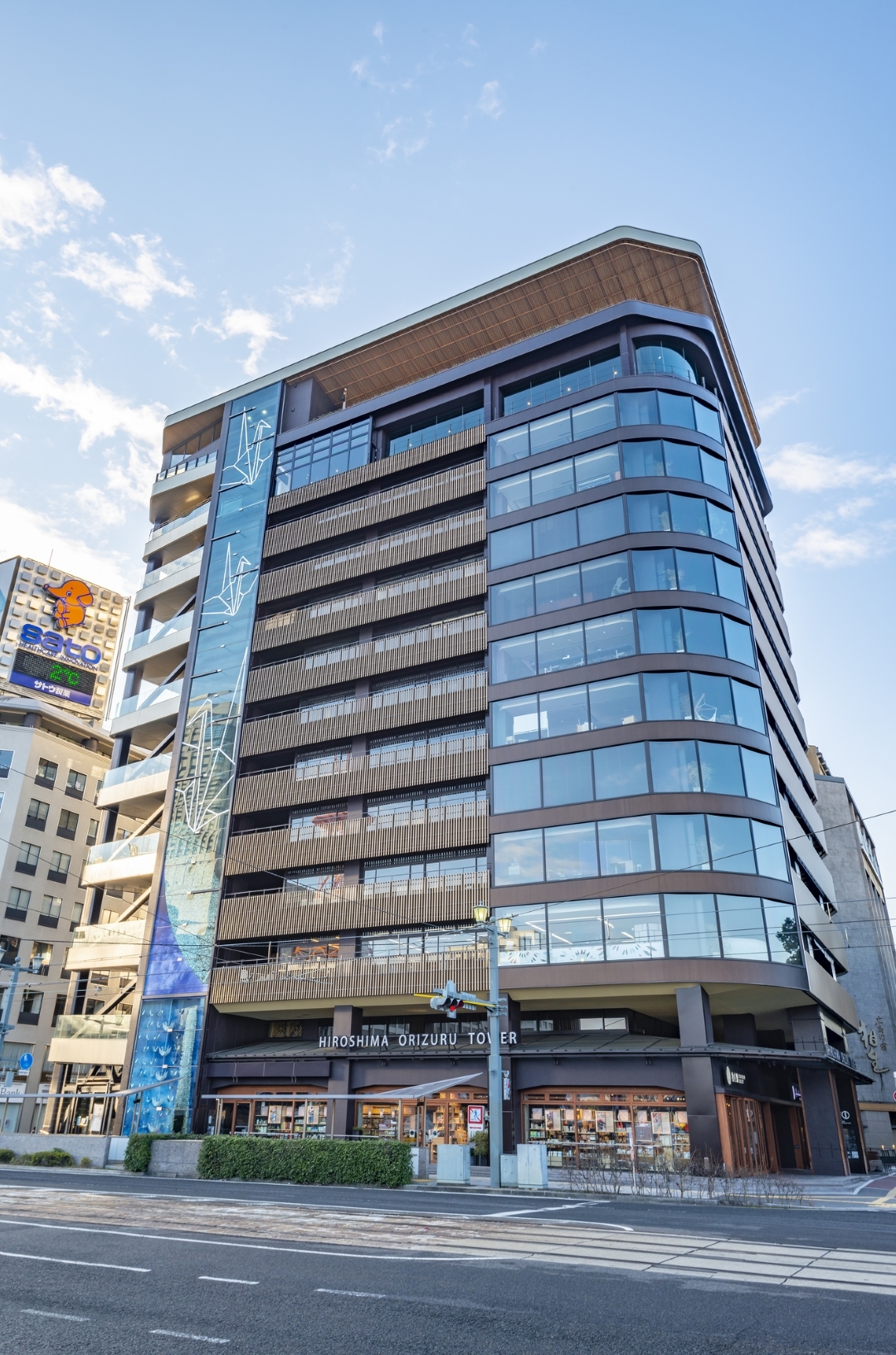 Hiroshima Peace Memorial Park (広島平和記念公園) is a vast park in the center of Hiroshima City and was built near the epicenter of the atomic bomb in the hope of permanent peace in the world. Please refer to the Town Map. There is the Atomic Bomb Dome (No. 3 pin on the Town Map; 原爆ドーム) which is registered as a World Heritage Site, the Hiroshima Peace Memorial Museum (No. 1 pin on the Town Map; 広島平和記念資料館) which displays the state of Hiroshima at the time of the atomic bombing, the memorial cenotaph for the Atomic Bomb Victims (No. 2 pin on the Town Map; 原爆死没者慰霊碑), and the National Peace Memorial Hall for the Atomic Bomb Victims (国立広島原爆死没者追悼平和祈念館) inside the park.
The atomic bomb exploded about 160 meters southeast of the Atomic Bomb Dome (then Hiroshima Prefectural Industrial Promotion Hall) and at an altitude of about 600 meters. The blast at that time had a pressure of 35 tons per square meter, and the wind speed was tremendous at 440 meters per second. It is said that the building was exposed to intense blast waves and heat rays, and it blew out the fire and burned. The blast worked almost straight down from above, so miraculously thick sidewalls and steel dome parts survived the collapse. However, all the people inside the building died instantly, and the inside of the building was completely destroyed by a fire caused by heat rays. It is said that the dome with the exposed steel frame became known as the "Atomic Bomb Dome".
The Hiroshima Peace Memorial Museum was opened in 1955 with the aim of communicating the reality of the damage caused by the atomic bomb to people all over the world and contributing to the abolition of nuclear weapons and the realization of permanent world peace, which is the heart of Hiroshima. It consists of the East Building and the Main Building and collects and displays photographs and materials showing the remains of the A-bomb survivors and the devastation of the A-bomb, as well as introducing the history of Hiroshima before and after the A-bomb and the situation of the nuclear age.

Advice:
Those who are staying at a hotel are recommended to visit on foot or by bus or tram.

We recommend you to go at least to the Hiroshima Peace Memorial Museum as well as the Atomic Bomb Dome.

About 15 minutes by car or 2.5km from/to Hiroshima Station.